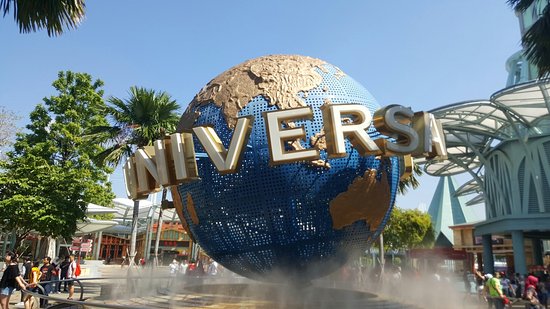 Universal Studios has a 20 hectares area with its own concepts and themes including Hollywood, New York, Sci-fi City, Ancient Egypt, The Lost World, Far Away, and then Madagascar. If you have a plan to visit the USS in the near future, you can buy Universal Studio Singapore tickets via Traveloka.

Maybe some people think twice about inviting children to play here because some of the rides look tense and adrenaline rushing, but it turns out that there are also many rides that can be enjoyed by toddlers.

Well, here are 6 rides that can be ridden by the little one with a height above 92 cm, or about 2.5 years:

This is a ride in the Madagascar area. Here you and your little one will board a ship with a relaxed current and enter a tunnel decorated by Alex, Mellman, Marty and Gloria who became heroes in the Madagascar film. The atmosphere is a bit dark anyway, but make sure the little one wants to sit alone because in this vehicle it is forbidden to hold the children.

Still from the Madagascar area, this is a Madagascar-themed merry-go-round. Anyone can ride these rides. Take it easy, if your child is still afraid to sit alone in one of the characters, you can accompany him to sit together in the train section. It’s fun, isn’t it?

The concept is like Madagascar; this Sesame Street ride also provides a train to surround a puppet palace. On the left and right there are cute dolls with interesting attractions that entertain visitors.

In the Ancient Egypt zone, there are rides called treasure hunters. You and your little one are challenged to become treasure hunters by using a car! Relax, the car already has a special track and moves itself with the bike. Look closely to find fun things along your journey!

Transformers The Ride 3D is one of the most crowded rides at Universal Studios Singapore. They say, the queue at Transformer the Ride 3D can be up to approximately 2 hours if it is near noon.

However, this is comparable to the facilities it offers. The visitors will be brought into a replica of a vehicle whose bench can move, then presented with 3D effects as in the movie “Transformers”.

This mini studio is located in the New York area. Various movie effects that you usually can only see in films such as hurricanes, fires, floods, collapsed buildings and so on, you can now watch directly in front of your own eyes.

With a duration of about 10 minutes, the experience of enjoying the work of famous director Steven Spielberg will make you not stop clicking in awe.

The most suitable and enjoyable show for children, Shrek 4D Adventure is never empty of fans. Aired inside the castle in the Far Away zone, you can enjoy Shrek movies with 4D effects accompanied by small shocks on the audience seating seats.

Not only for children, adults and parents also really enjoy the experience 10 minutes of watching the Shrek 4D movie.

8. Meet and Greet with Movie Characters

If the little one still does not dare to try the rides above, just calm down, there are many other things that can be done, besides taking photos of course. Every day at certain hours, in each zone there is a meet and greet of the characters in universal studios. There are Minions, Sesame Street, Alex, Gloria, King Julien, and many more! Take a meet and greet schedule at the nearest store, so you don’t miss out.

There is a Sesame Street parade or Minion Parade that we can watch. Don’t miss your vacation to Universal Studios Singapore! Happy Holiday with Traveloka!

The Moco Museum: a museum Amsterdam not to be missed

How Do I Find Good European Cruise Locations?